Skip to content
Posted on February 3, 2014 by Bobby Posted in Adoption, Family, Music 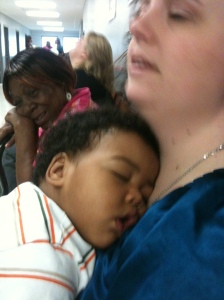 We were wedged into uncomfortable benches lining the hallway of a noisy and unwelcoming courthouse in Dallas. Six weeks of anxiety, fear, and grief were mingled with excitement. A judge would decide whether or not to return our then foster son to our home. His decision wasn’t really in doubt that day as everyone involved knew J belonged with us. Our trepidation came from our impending interaction with some members of his birth family. Most of them are wonderful people, but every family has a few people that are as crazy as a bag of cats. Even more than that, we were worried about how J would react to us after having been gone.

He was gone for a month and a half. Who knows what he experienced. Who knows what his little heart and mind felt as the only parents and home he had known were suddenly gone. Big Momma (J’s great grandmother with whom he had been placed) told us that all he did was cry. In her words, “all he wanted was his parents back.” This was the day when that was going to happen.

But J wasn’t at the courthouse yet, and part of us feared that someone may make a very poor choice and not show up at all. Those fears were alleviated when the elevator doors opened and out stepped J’s birth-mom holding him. I recognized his cry before I saw them. He was upset. It was a cry that seemed different from the ones that echoed in my mind during the previous 6 weeks. It was a cry that didn’t stop for the next 20 minutes. No matter what his birth-mom did to try to soothe him, J would have none of it. Finally, J’s caseworker asked if we wanted to see him.

She brought J to us, and for the first time in 45 days we were holding our son. I would love to say that he immediately stopped crying and became the glowing, jubilant boy that he had been just a few weeks prior, but that would be a lie. He recoiled from us as if we were complete strangers. He wanted nothing more than to get down and crawl/toddle away down the corridor. This struggle lasted for what seemed like hours in my wounded heart.

Then something happened. God gave me the answer. As clearly I as have ever known anything, I knew God had given us an immediate answer to a prayer that was too deep for words to express. With the Holy Spirit propelling my words, I leaned into my crying son’s ear and softly sang, “Patty cake, patty cake, baker’s man: Bake me a cake as fast as you can…” As the words were supernaturally transferred from my heart to his, his entire demeanor changed.

His eyes lit up with a joy that burned away the fog of our separation. His mouth gaped wide with silent cheers of remembrance that chased away his piercing cries. His chubby hands became to clap to “roll ’em up, roll ’em up” and “throw ’em in the pan.”

Our son was back. God had used Patty Cake to restore a relationship that had been involuntarily broken.

There is a reason music means so much to us. To this day, music remains a vital part of J’s personality and learning process. I believe this to be true for most people. God has created music to be enjoyed by men as they use it to glorify God’s nature and works. Music binds us together, for better or worse. The community in which we experience music shapes who we are. The spiritual content, or lack thereof, is an influential teacher in our lives. Make no mistake about it, what you consume matters. What you feed your children matters.

By God’s grace and mercy, music can be a tool for healing and restoration. God can use it to bring us to a place of peace and rest. We know firsthand. Within five minutes of our courthouse Patty Cake reunion, our son slept in his mother’s arms. According to Big Momma, he slept more soundly in that courthouse hallway than she had seen him sleep in the previous 45 days.

Tell Us What You Think Cancel reply